Risotto is a creamy rice dish that originated in the rice-growing regions of Northern Italy.

Legend has it this dish dates back to 1574, when a stained-glass maker working on Milan’s cathedral developed yellow-tinted glass by adding saffron to his pigments. Since saffron turned his glass into a magnificent hue, the glassmaker added the spice to a rice dish served at his boss’s daughter’s wedding, creating “risus optimus”—Latin for excellent rice. From that day forward, rice with a yellow hue has been called “risotto alla Milanese.”

While most of us associate Italy with wine and olive oil, Italy has been growing rice since the 14th century. No doubt brought from the east on ships by Venetian and Genoese merchants, Italian rice cultivation can be documented back to 1475. Italians now grow rice in the Lombardy, Piedmonte, and Veneto regions.

While most food historians believe risotto is a peasant dish, turned sophisticated, the Italians are not the least bit hush-hush about the secrets to making good risotto. The first secret is, of course, the rice. Now, you can’t use that box of Uncle Ben’s® sitting in your pantry. A creamy risotto requires Italian rice—it is short with a barrel shape, much different than long-grain rice.

Italian rice has two characteristics—a very soft starch on the outside that melts away from the kernel, creating a creamy texture, and a very hard inner starch that stays firm, leaving the finished product “al dente”, or firm to the bite. There are four varieties of rice that will make a good risotto: comune, semifino, fino, and superfino. The type most commonly used for risotto is Arborio, a superfino variety typically available in the United States.

The second secret is the technique. Risotto is made by braising rice, which allows the grains to absorb the flavors of the cooking liquid, usually broth, along with other ingredients. The rice used in this preparation lends its starches to the cooking liquid—the results, a rich consistency that resembles a heavy cream sauce. The process begins by toasting the rice in a “soffrito”, a combination of chopped vegetables like onion, garlic, and carrots, before adding the broth in slowly, usually one cup at a time. While not particularly difficult to prepare, a good risotto requires patience and your undivided attention for 20 to 25 minutes, while you stir it in a rhythmic manner.

What makes risotto distinctive is the combination of local ingredients that give it character. In the Piedmonte region, Italians add truffles and red Barolo wine. In Venice, seafood is a mainstay. Risotto is versatile. You can add any ingredients, and the cooking technique will blend and smooth out the flavors into a deliciously creamy dish. Following are two of my preparations for risotto.

Serve with a green salad and a loaf of bread.

Place chicken breasts in a medium-sized bowl, cover with plastic wrap, and refrigerate for at least 2 hours, or as long as 6 hours.

Grill chicken breasts over medium heat, turning once, until meat is opaque throughout and juices run clear, about 10 to 12 minutes. Remove from the grill and slice thinly. Set aside.

In a large saucepan, bring 1 can chicken broth plus 1 cup water to a simmer over medium heat. Add 4 tablespoons butter, garlic, onion, and leek and cook, stirring occasionally, until onion is soft, about 5 minutes.

Add Arborio rice and stir until the grains are coated with butter. As liquid cooks down, add the second can of chicken broth ½ cup at a time and cook, stirring continually, until Arborio rice absorbs all the liquid, about 20 to 25 minutes.

Adjust the heat as necessary so that the mixture maintains a gentle boil. Add wine, asparagus, peas, chives, Parmesan cheese, and 4 tablespoons butter. Mix and cook only long enough to heat through, about 2 minutes.

Season with salt and pepper to taste. Sprinkle with additional Parmesan cheese if desired. Serve immediately.

Storing garden or English peas: Peas are best eaten immediately after they are picked. When stored in plastic bags and refrigerated, garden peas will last 3 to 4 days.

In a heavy large skillet, cook bacon over medium heat until crisp, about 5 minutes. Transfer bacon to paper towels to drain. When dry, crumble bacon into bite-size pieces and set aside.

Add remaining ½ cup wine and continue stirring until rice has absorbed all the liquid. Follow this same process with chicken broth, adding ½ cup at a time until all liquid has been absorbed.

Reduce the heat to low, stirring frequently. Adjust the heat as necessary so that the mixture maintains a gentle boil. Continue to ladle in ½ cup broth at a time, stirring continually, and cook until liquid has been absorbed, all chicken broth has been added, and Arborio rice is tender.

Cooking tip for making a creamy risotto: Although labor intensive, it is important to add the liquid ½ cup at a time. Stir continually until all the liquid is absorbed. Then add another ½ cup. This technique results in rice that is delectably creamy while the grains remain separate and firm.

Carol Ann Kates is the author of award-winning, best-selling cookbook, Secret Recipes from the Corner Market, selected as one of the top ten favorite cookbooks by the Denver Post. For more information, visit www.carolannkates.com. 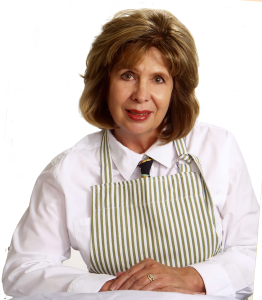 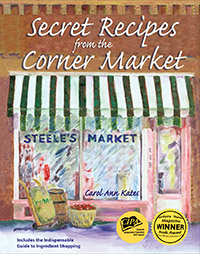 Secret Recipes from the Corner Market
by Carol Ann Kates

Scroll back to top